Solar PV deployment on rooftops in the UK is forecast to exceed 500MWdc in 2022, representing a landmark moment for the UK solar industry.

This feature article discusses the drivers behind the UK’s solar rooftop market, forecasts deployment during 2022 by system size categories, and outlines the factors set to move rooftop demand to the gigawatt annual level by the end of this decade.

Recognising the increased investments flowing into the UK’s rooftop market, Solar Media can announce the release of the first ever market research report focused on the UK’s commercial rooftop solar PV sector; the UK Solar Commercial Rooftop Opportunities report. The data and graphics shown below use the findings of the report; more details on the new report can be found here.

Thriving post-subsidy with a plethora of economic and environmental drivers

When the UK introduced feed-in tariff subsidies for rooftop solar PV at the start of 2010, there was much excitement about the scale of the opportunities on offer from the large commercial rooftop sector. Indeed, if any of the then-Department of Energy and Climate Change civil servants or ministers chose to actively be pictured beside a solar panel, it was inevitably on a rooftop.

All sorts of aspirations were voiced from politicians, with trade bodies and commercial installers seeking to put a ‘rocket booster’ underneath the commercial rooftop space.

However, none of this really came to anything. The city money went into ground-mounted solar farms and rooftop FiTs were exploited splendidly by homeowners and the farming sector.

Payback times coupled with the lack of any strong environmental urge ultimately hampered sustainable growth in the commercial rooftop market back then. And by the time the FiTs were finally removed at the start of 2019, just a few of the UK’s corporates had done anything meaningful in terms of deployment.

But that was then. Today the world is radically different and changing by the month when it comes to corporate ‘responsibility’, minimising carbon footprints and having a viable plan to mitigate against traditional energy supply uncertainties.

Indeed, if the only driver was corporate ‘image’, investments into solar PV on rooftops would likely get signed off at the board level without any qualms, such is the rate of change today.

Companies can’t be seen not to have a sustainability and net zero strategy. This can be done in one of two ways. Agree to act as a PPA offtaker from a ‘green’ supplier, or be a micro-generator on-site. By far, the one with greatest potential for ‘image’ and cost savings is the second option; and from a micro-generation standpoint, solar PV is the only renewable game in town.

Indeed, within the UK, it is not just the corporate sector that is being driven by these social and economic factors; government-owned bodies and local councils are equally forced to be proactive in this regard and each has truly stepped up the ante in the past 12 months.

So far, 2021 has been the most important year for commercial UK solar rooftops for a variety of reasons. While there have, by default, been some speculative claims, the sanity-check for deployment on large roofs is having an audited planning application signed off at the local council level. Here, the numbers speak for themselves, and give the strongest leading indicator in terms of growth potential going forward.

Let’s look now at some of the key metrics that serve as the basis for the long-term creation of a GW-plus annual rooftop market in the UK.

The graphic below provides annual (calendar year) rooftop deployment of solar PV in the UK from 2010 (essentially the start of solar in the UK). We have segmented rooftop deployment by residential (sub 4kW) and commercial, with the commercial (or as some call it, rooftop C&I, or DG, etc.) divided up into capacity-based bands. The choice of bands was somewhat legacy based on FiT banding levels, but still serves as valid today.

The market size for 2021 uses released market sizing data for the first three quarters of the year by Solar Media (now used by Solar Energy UK as ‘official’ numbers for the UK solar industry) together with the current quarter (Q4 2021) estimate. 2022 is entirely a forecast obviously, but factors in planned activity today that will result in deployment next year, along with certain leading indicators that are trending north daily. 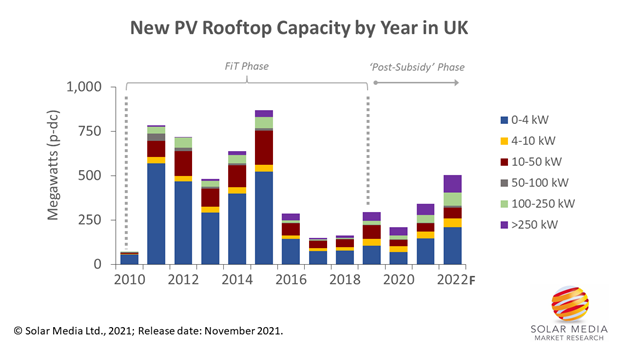 New PV installations on rooftops in the UK are forecast to exceed 500MWdc during 2022, with this sector set to reach the annual gigawatt level well before the end of the decade.

Benefiting most from the explosive growth in rooftop deployment in the UK are the local installers, many of whom have had to wait a few years since 2016 when FiT rates were cut substantially. During this time, many had diversified into a broad range of renewables offerings. Some of course moved out of the sector completely, were dissolved, or morphed into a new operating entity.

Currently, there are about 20-30 key rooftop installers in the UK, with a handful having a modest geographic reach. Volumes for these key installers max out at the 20-30MWdc level annually, but a few – most notably EvoEnergy – have the scope to see 50MW-plus annual capacities on offer in the next 2-3 years.

From a component supply standpoint, the market is even more consolidated. Module supply is largely coming from JA Solar, Trina Solar, JinkoSolar, Hanwha Q-CELLS and LONGi Solar. Of these, JA Solar remains the clear leader by some margin.

From a market research perspective, our focus at Solar Media is now equally spread across rooftop and ground-mount activities; the first time this has happened since 2010 in the UK. To tap into the learnings from our team, a couple of options are available right now.

I will be delivering a special rooftop-specific webinar on Wednesday 10 November 2021. Free to attend, please apply to attend through the link here.

To get details on commercial rooftop installations (built and planned) from the start of post-subsidy (early 2019), the new UK Solar Commercial Rooftop Opportunities report is a must-have market intelligence supplement. The first report release (November 2021) includes more than 600 rooftop projects (each >100kWp-dc) since the start of 2019, adding up to approximately 250MW.

The new report includes site information, planning audit trails, developers, installers, third-party investors and known module/inverter/mounting component suppliers. It is ideal for existing players to benchmark their market-shares against the sector as a whole and compared to their competition. For companies looking to move into the UK commercial rooftop space, the report provides a comprehensive guidebook to the leading stakeholders in the market today.

No comments to show.